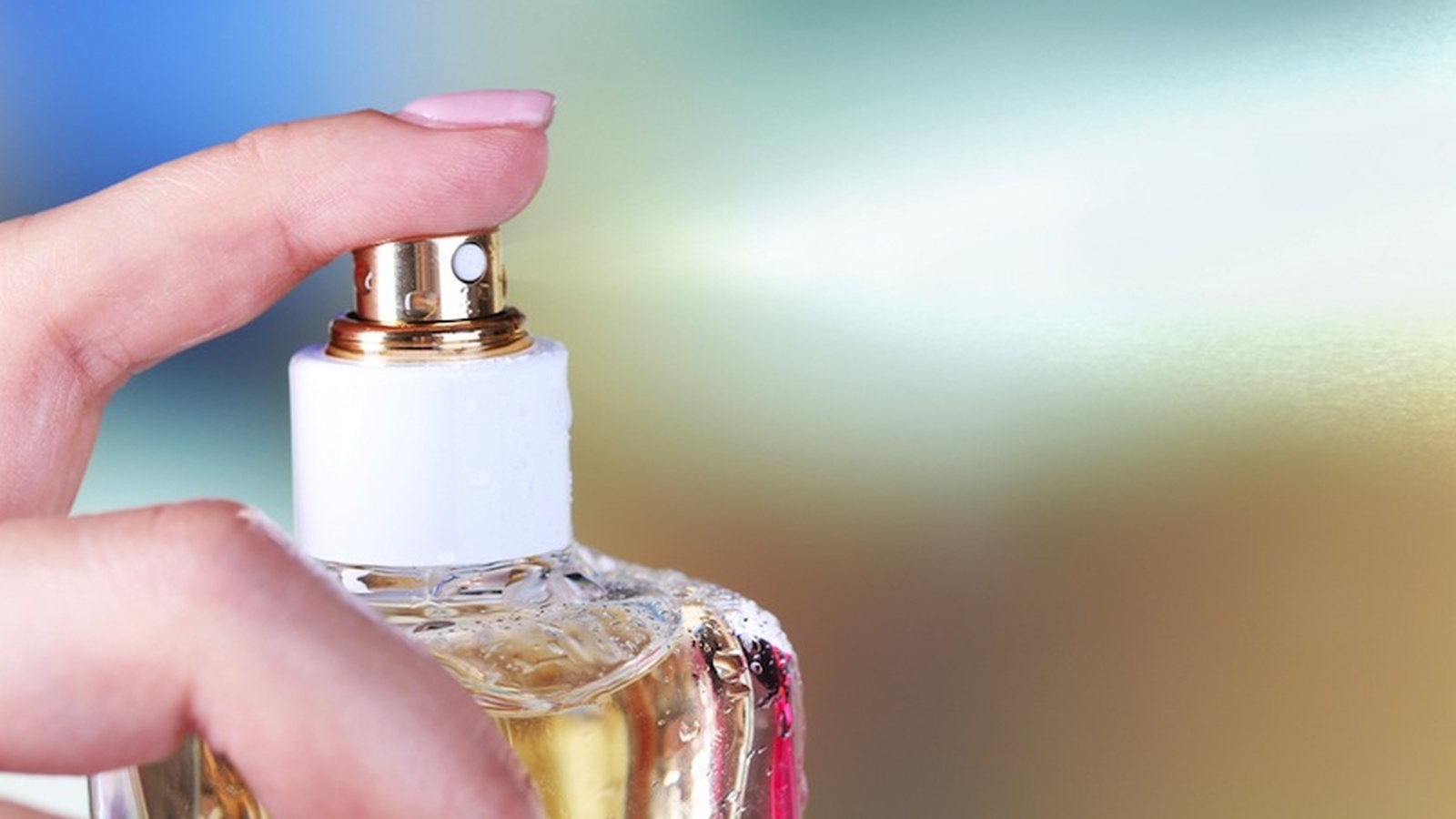 Not So Sexy: Hidden Chemicals In Perfume And Cologne

A rose may be a rose. But that rose-like fragrance in your perfume may be something else entirely, concocted from any number of the fragrance industry’s 3,100 stock chemical ingredients, the blend of which is almost always kept hidden from the consumer. Makers of popular perfumes, colognes and body sprays market their scents with terms like “floral,” “exotic,” or “musky,” but they don’t disclose that many scents are actually a complex cocktail of natural essences and synthetic chemicals – often petrochemicals.

What Chemicals Are Hiding In Your Fragrance?

The average fragrance product tested contained 14 secret chemicals not listed on the label. Among them are chemicals associated with hormone disruption and allergic reactions, and many substances that have not been assessed for safety in personal care products.

Also in the ranks of undisclosed ingredients are chemicals with troubling hazardous properties or with a propensity to accumulate in human tissues. These include diethyl phthalate, a chemical found in 97 percent of Americans (Silva 2004) and linked to sperm damage in human epidemiological studies (Swan 2008), and musk ketone, a synthetic fragrance ingredient that concentrates in human fat tissue and breast milk (Hutter 2009; Reiner 2007). 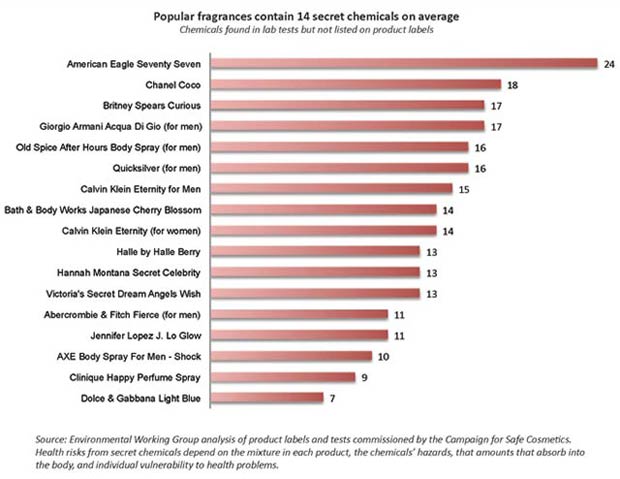 This complex mix of clandestine compounds in popular colognes and perfumes makes it impossible for consumers to make informed decisions about the products they consider buying.

Has The Safety Of These Chemicals Been Assessed?

The federal government is equally uninformed. A review of government records shows that the U.S. Food and Drug Administration has not assessed the vast majority of these secret fragrance chemicals for safety when used in spray-on personal care products such as fragrances. Nor have most been evaluated by the safety review panel of the International Fragrance Association or any other publicly accountable institution.

Fragrance secrecy is legal due to a giant loophole in the Federal Fair Packaging and Labeling Act of 1973, which requires companies to list cosmetics ingredients on the product labels but explicitly exempts fragrance. By taking advantage of this loophole, the cosmetics industry has kept the public in the dark about the ingredients in fragrance, even those that present potential health risks or build up in people’s bodies.

Ingredients not in a product’s hidden fragrance mixture must be listed on the label. As a result, manufacturers disclose some chemical constituents on ingredient lists but lump others together in the generic category of “fragrance.” In fact, “fragrances” are typically mixtures of many different secret chemicals, like those uncovered in this study. On average, the 17 name-brand fragrances tested in this study contained nearly equal numbers of secret and labeled ingredients, with 14 chemicals kept secret but found through testing, and 15 disclosed on labels.

Widespread exposure and a long-standing culture of secrecy within the fragrance industry continue to put countless people at risk of contact sensitization to fragrances with poorly tested and intentionally unlabeled ingredients (Schnuch 2007). 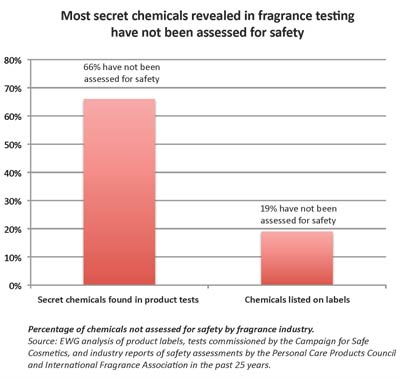 According to EWG analysis, the fragrance industry has published safety assessments for only 34% of the unlabeled ingredients. The unassessed chemicals range from food additives whose safety in perfumes has not been assessed to chemicals with limited public safety data such as synthetic musk fragrances, which accumulate in the human body and may be linked to hormone disruption.

Some chemicals that are disclosed on the labels of the products in this report also raise safety concerns. They include sunscreen and ultraviolet-protector chemicals associated with hormone disruption (Schlumpf 2004) and 24 chemical sensitizers that can trigger allergic reactions (European Commission Scientific Committee on Cosmetic Products and Non-Food Products (EC) 1999).

To make matters worse, FDA lacks the authority to require manufacturers to test cosmetics for safety, including fragranced products, before they are sold to consumers. As a result, people using perfume, cologne, body spray and other scented cosmetics like lotion and aftershave are unknowingly exposed to chemicals that may increase their risk for certain health problems.

What Product Testing Has Revealed

When sprayed or applied on the skin, many chemicals from perfumes, cosmetics and personal care products are inhaled. Others are absorbed through the skin. Either way, many of these chemicals can accumulate in the body. As a result, the bodies of most Americans are polluted with multiple cosmetics ingredients. This pollution begins in the womb and continues through life. 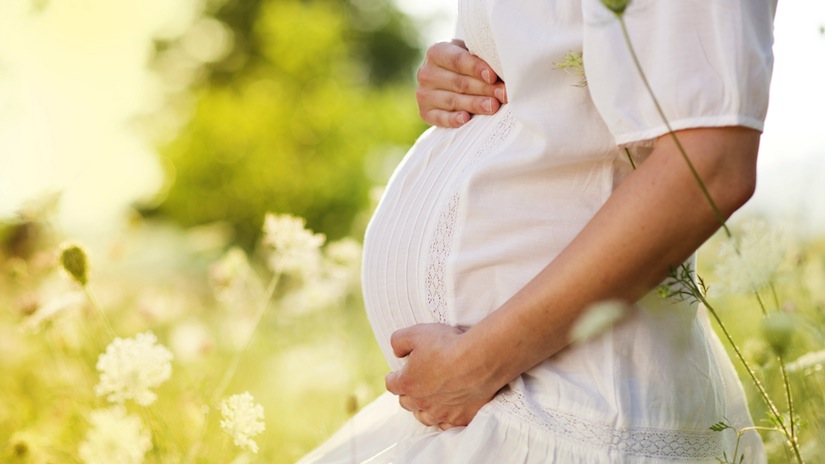 A recent EWG study found Galaxolide and Tonalide, two synthetic musks, in the cord blood of newborn babies (EWG 2009). Both musks contaminate people and the environment worldwide, have been associated with toxicity to the endocrine system (van der Burg 2008) and were identified in the majority of products tested for this study.

Similarly, a pregnant woman’s use of some fragrances and other cosmetics frequently may expose her growing fetus to diethyl phthalate (DEP), a common perfume solvent linked to abnormal development of reproductive organs in baby boys and sperm damage in adult men (Washington Toxics Coalition 2009). New research also links prenatal exposure of DEP to clinically diagnosed Attention Deficit Disorder in children (Engel 2010). This analysis found DEP in 12 of 17 products tested, at levels ranging from 30 parts per million (ppm) to 32,000 ppm in Eternity for Women.

Numerous other products used daily, such as shampoos, lotions, bath products, cleaning sprays, air fresheners and laundry and dishwashing detergents, also contain strongly scented, volatile ingredients that are hidden behind the word “fragrance. Some of these ingredients react with ozone in the indoor air, generating many potentially harmful secondary air pollutants such as formaldehyde and ultrafine particles (Nazaroff 2004).

As our test results show, short of sending your favorite perfume to a lab for testing, shoppers have no way of knowing exactly which of the 3,100 fragrance ingredients may be hiding in their beauty products or even in their child’s baby shampoo. This study focused on several categories of chemicals – specifically volatile compounds, semi-volatile compounds and synthetic musks. The laboratory analyses, while thorough, were not exhaustive, which means that additional chemicals of concern may also be present in the tested products.