Join James Wong, an ethno-botanist from the UK, in this exciting show airing on the BBC in the UK. We found out about James through a friend of ours and tried our best to meet up with him while we were in the UK filming for our next documentary. Unfortunately he was on the other side of the country shooting a new episode and we had to fly out to the US for other interviews (Harvey Diamond & Dr Mercola).

In this episode James talks about wild harvesting fruits and berries (what could be better!), including Goji berries. He then shows a fantastic flu fighting winter soup recipe loaded with medicinal foods. If you are a vegetarian you can make this soup without the chicken but if you do eat chicken make sure it's organic and free range!

We think that what James Wong is doing with this show is fantastic, raising the awareness of introducing more medicinal foods into our diets in a whole and natural form (and bringing this into the mainstream consciousness).

Grow your own drugs: an interview with James Wong

Plants can be much more than a pretty backdrop to life. Read this and you'll never look at a garden in the same way again.

You're probably using plant based remedies on a daily basis without realizing it. There's something about the word 'drugs' that makes you think of cannabis plants, lines of coke or white pills in a packet (bought over the counter or through dodgy deals).

Very few people consider dandelions, nettles and mint growing in the back garden as ‘drugs'.

Growing and using plants as remedies is nothing new. But all too often natural remedies get labeled as, at best, 'alternative'; at worst 'mumbo-jumbo' or new age quackery.

So this is exactly why the BBC series 'Grow your own drugs', was so intriguing. It was presented by James Wong, who certainly doesn't look or act like a hippie. Rather, he's an ethnobotanist (ethnobotany is the science of studying how people use plants) who trained at the Royal Botanical Gardens at Kew. Here was a fresh faced, groovy 27-year-old guy showing us how to make the likes of sage and raspberry leaf tea for women's hot flushes and a garlic foot bath for Athlete's Foot.

The idea of growing your own drugs smashes through the mainstream conventional conception of what drugs look like and where we get them from. It also radically changes the way we look at gardens and the role of plants in them.

‘Understanding the medicinal use of plants around us is not some superhuman or supergeeky ability but is actually the way in which every other culture on earth sees plants - the way, in fact, that we all did until a few short decades ago,' Wong says.

Not just a pretty plant

Nowadays we tend to view plants as pretty objects. Although more people are beginning to grow their own fruit and veg, the chances are, most of the garden will be dedicated to ornamental plants with only a small patch for food.

In rural Malaysia where Wong grew up it was the other way round. 'There "ornamental" is one of the many uses of plants. 90 percent of the garden is grown for use', he says.

His family garden was filled with flowers and plants grown for medicinal and food purposes. He remembers watching his grandmother pour mixtures of pungent spices and brightly colored roots from the garden into a huge stone pestle and mortar, then ground them up into a fragrant mixture to make remedies to soothe mosquito bites or a cold.

'I was bought up to see plants as solutions in life - not just a pretty backdrop too it,' he says.

It is this way of seeing plants that he hopes he can spread in the UK. Since he moved here in 1999 he's been applying this ethos, growing plants in his mother's garden in South London (he shares a flat that doesn't have one).

He's keen to break down the distinction between natural and conventional medicine. 'A lot of people here put a big black line between traditional plant remedies and conventional ones. Yet up to 50 percent of the world's top conventional drugs are originally derived from natural sources. Major drugs such as aspirin, morphine, penicillin have natural origins.'

The World Health Organisation estimates that in some African and Asian countries up to 80 percent of the population relies on plant-based medicine as the key form of healthcare, and actively promotes its use. Scientists estimate there are up to 50,000 potential medicinal plant species.

In fact you're probably using plant based remedies on a daily basis without realizing it. Common ones include mint, thyme, chilli and garlic. So accustomed are we to viewing these as food and flavor enhancers that it's good to find out - or be reminded - that trapped within these cells are biologically active chemicals with proven medicinal properties, many of which are commonly found in over-the-counter drugs.

Take chilli. Anyone who eats a spicy curry when they have a cold to clear it - the same chemical is used in loads of over the counter drugs,' says Wong. ‘Coffee is another one - a traditional remedy for fatigue that's been used for thousands of years.'

Many of the ‘drugs' Wong talks about are easy to grow - as easy as keeping a bunch of basil or mint in glasses of water on a kitchen window sill. The majority of his 'Top 100 Plants' he lists in the back section of his book, Grow Your Own Drugs, (£16.99 HarperCollins) will 'happily root in your back garden.' Otherwise you can find them in hedgerows or buy them from garden centres, health shops or online.

Making a remedy can be as simple as pouring hot water over some mint leaves. Wong's book has over 60 recipes for teas, tinctures (chopped plants steeped in alcohol), herb infused-honey, vinegars, infused oils, balms, gargles, syrups, sweets - ‘all easy, cheap and fun to make.' It's a far cry from popping a pill and in these frugal times they have the advantage of being cheap.

Does he think we take too many pills? 'I didn't study medicine enough to be able to answer that,' he says, diplomatically.

Whatever your stance on natural or 'conventional' remedies it certainly makes sense to pop less pills. As John Naish writes in the Ecologist article ‘Drugs on tap' the implications of our pill-for-every-ill culture go far beyond the adverse effects on human health. The complex chemicals in modern pharmaceuticals, as well as the manufacturing processes involved, leave a massive industrial footprint on the natural world, contaminating the food chain and our drinking water. As he also points out, swallowing more over-the-counter (OTC) painkillers makes people increasingly prone to 'rebound headaches' - headaches caused by withdrawal symptoms from OTC painkillers which encourages habitual pill-poppers to take more painkillers, and the costly cycle continues.

Does Wong still take pills? 'Yes! I was told off for buying it in a supermarket. Someone said to me, "I can't believe you're buying this - the program was another BBC scam".'

But he says they were wrong for two reasons. First, just because you make your own doesn't mean you can't also use conventional drugs. Second, even in the areas of the world where people rely on plant based medicine for health they still mix and match. 'My grandmother would dish out aspirin and a traditional remedy like chicken soup to boost the immune system. When people take herbal medicine in other parts of the world, it's not a lifestyle choice. It's practicality,' he says. They need solutions that are 'cheap, easy and quick to prepare - basically made from the contents of their backyard.'

The trouble with plant remedies is citing the evidence. Whilst there is a funding structure to develop trials around pharmaceutical drugs, very few companies have a commercial interest in funding trials on plant preparations. Wong's book includes a number of disclaimers - results will vary from person to person, consult a doctor before trying natural remedies, and particularly if you are on any other medication, check for allergies, make sure you have identified the plants you use correctly, and so on.

He may be wary of making claims and diverting people from conventional drugs but what he does well is stand up for natural remedies. It's about time someone with a big, wide reaching voice did just that and gave credit where credit is due.

Natural remedies are sometimes portrayed as wishy washy and ineffective. His book and TV series reveal that many plants contain the same active ingredients as over the counter drugs. Get growing!

Even in the smallest garden, you can create a complete medicinal herb patch. With space at premium, you need to make sure that each plant is really earning its keep.

Below is a list of the top ten plants that are as versatile as they are effective.

Many of the above plants can simply be taken as a tea (wash, chop and steep in hot water for 10 minutes). 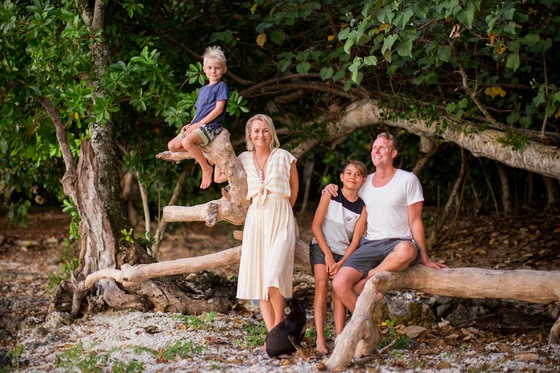 Why We Spent a Year on a Tropical Island

How to Overcome Hair Loss Naturally