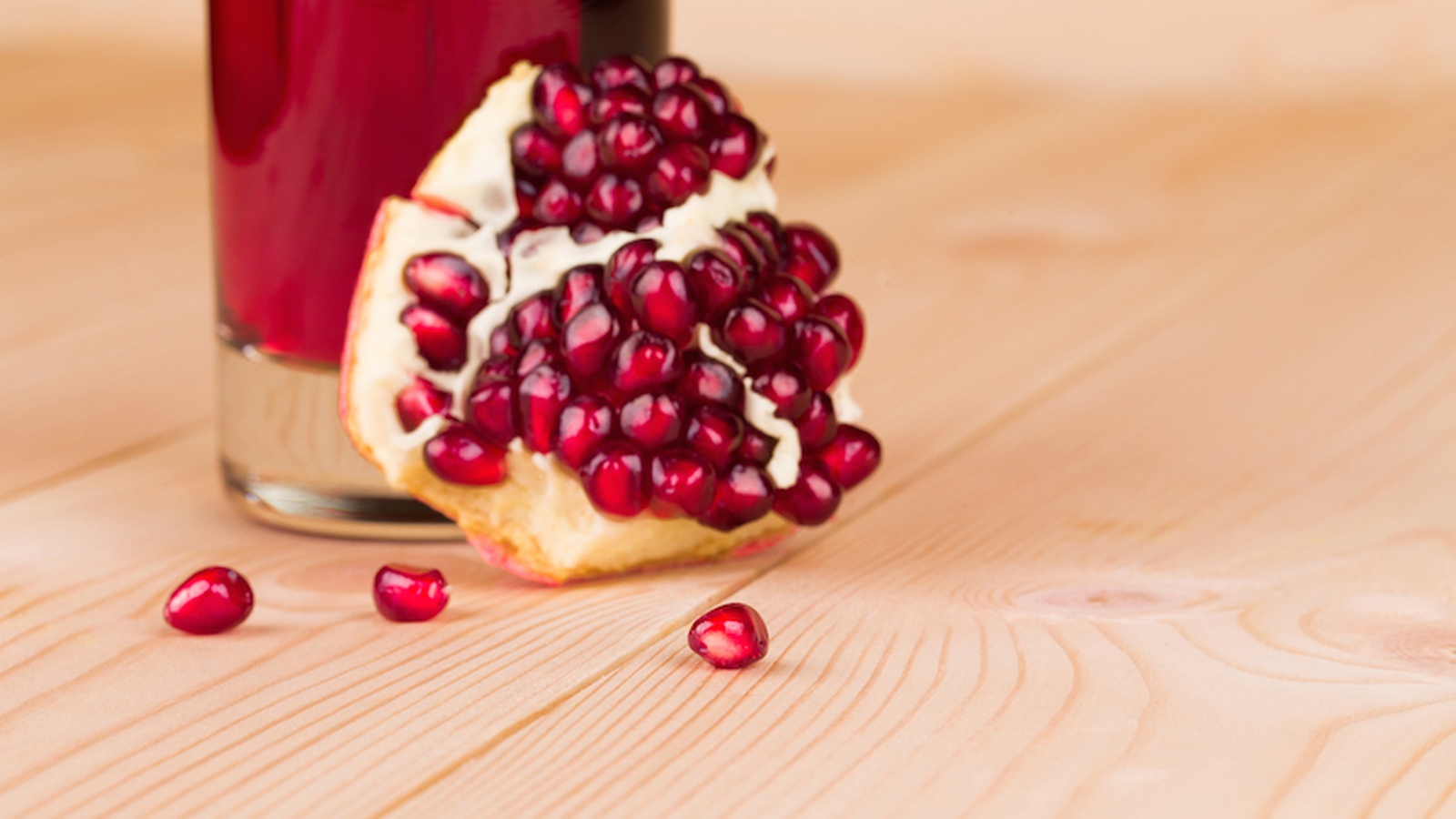 Pomegranate Juice - Juice From The Tree of Life

Ancient religions and the mystery traditions have always used the pomegranate tree and its fruit in symbol and decoration and myth, and alchemists and the hermetic traditions have often used it in symbolic form for its many esoteric connections to the ‘Tree of Life’, the Qabbalah, and other spiritual streams.

The pomegranate is also the traditional representation of fertility and life, and seems to have its origins everywhere, particularly through the Mediterranean, up to Georgia and across to China and to India – there is even a Sanskrit word for the fruit, and Indian royalty always included it in banquet and ritual.

There are many European references to pomegranates and they were to be found growing wild in Georgia in 1772. The Spanish Conquistadores took the pomegranate to America and Jesuit missionaries carried it north to their missions in California.

With so much scientific and medical interest being shown in the current era, it seems almost that this fruit is special beyond others, that it has been singled out as a gift to the human race.

And other questions arise: the pomegranate tree lives a very long time and suffers, like the fruit, almost no disease or damage by pests. Is this tree actually keeping its own health? Are its powerful antioxidants actually keeping the tree healthy too?

Why has it been selected by many cultures and religions to represent fertility, good health and good luck, rather than other fruit?

Why are there so many contradictions in the fruit? It is sweet, and yet tart; the fruit is tough and wrinkled, and yet when open is rich and red and sweet. It has been called the fruit of the underworld, with strong connections to Persephone, and yet the Koran calls it the fruit of paradise. It is so hard to eat the fruit and then eventually so rewarding.

In the field of vibrational healing, we are always dealing with the human system as a ‘bio-field’, or field of information or energy, which at the most fundamental levels operates on energies of all qualities. All the medications and foods we take are consumed because we wish to incorporate the energetics of those substances in our ‘energy fields’. And it is the quality of the energetics of any substance that is of the highest importance.

I believe that the pomegranate has always been recognised as a fruit which holds a particularly potent energetic charge. It is in the look of the fruit, the taste of the juice, the colour of the arils, the variety of its many qualities. Anyone who pays attention to what their senses (including the more subtle senses) are telling them will soon know whether a substance will enhance their health and energy. Naturally occurring pomegranates and their juice register high on the list of those which do enhance.

This fruit contains more antioxidants than green tea and red wine combined. It is also a lifestyle choice these days, as witnessed by the profusion of more than five hundred new products derived from it in the US in the last 18 months. This fruit is now oddly fashionable – pomegranate martinis were served at the Oscars and Jo Malone's new fragrance is called ‘Pomegranate Noir’. Even Estee Lauder launched a new range of skin repair called ‘Pomegranate’ last year! Far more importantly, hundreds of recent scientific studies are showing that this juice is a very wise choice for enhancing and prolonging your life.

Phytochemicals are powerful chemicals derived from plants, and the antioxidant phenolics are one of many sub-classes of these. It is an interesting fact that plants, just like animals and humans, have developed methods to protect their own health, from all the depredations of the environment. Because plants are not mobile, these defences come in the form of powerful chemicals, which also give the plants their colour, flavour, smell and texture. It is these very defences which give rise to the powerful chemicals which have proven useful to humanity, and which promise much more than has yet been discovered. It is also that very synergistic combination of compounds that may hold the secret to these effects, rather than extracts made of specific compounds which are isolated, such as happens in the medical extraction of ellagic acid.

The astonishing antioxidant properties of the pomegranate are effective against many health conditions, including atherosclerosis, arterial and heart inflammation and high blood pressure. These properties are also useful for protection of the liver and kidneys from free radical damage, fighting bacteria and for promoting the activity of other antioxidants.

Ground-breaking research has been done recently which shows the juice’s potent effects on Alzheimer’s and on strokes. Drinking a glass of the juice daily can help to slow or even stop the progress of lung cancer and also of prostate cancer, allowing diagnosed men to live longer. Pomegranate fruit extract can block skin tumour formation in mice exposed to a cancer-causing agent – this and other studies show great potential in cancer intervention.

Even more interesting to some, perhaps, is the study which implies that pomegranate juice seems to be a ‘natural Viagra’, according to studies on rabbits. Pomegranates may make you frisky!

Pomegranate fruit extracts can block enzymes that contribute to osteoarthritis according to a Case Western Reserve University School of Medicine study. Drinking pomegranate juice during pregnancy may help reduce the risk of brain injuries in babies, according to researchers at the Washington University School of Medicine in St. Louis. Pomegranates contain very high concentrations of polyphenols, a substance also found in berries and grapes, which have been shown to potentially have anti-ageing and neuro-protective effects.

Also exciting is the discovery of extremely high quantities of the anti-cancer phenolic ellagic acid in pomegranates, and also its uses in fighting cardiovascular diseases. The pomegranate is one of the world’s greatest known sources of ellagic acid, a powerful antioxidant and anti-cancer phytochemical which is being studied intensively for these properties. Dr Wendy Smith and her team at the University of Kentucky have shown that ellagic acid helps prevent the earliest chemical reactions that can lead to breast cancer. Dr Kim of South Korea’s Pusan National University led a team of scientists from the US, Canada, Great Britain and Israel in powerful findings regarding the action of pomegranate phytochemicals on reduction of breast cancer proliferation and formation of cancerous lesions. Such research is being fast-tracked in many places.

In the global functional food industry, pomegranate is often mentioned among a novel category of exotic plant sources called "superfruits", indicating fruits which are particularly potent in their effect on human health, historically and in modern times.

Maintaining your health becomes a pleasure with such a juice, as you receive a whole package of balanced phytochemicals, not just extracts of ‘active ingredients’ as you’ll often find in supplements. In fact, a properly produced pomegranate juice should be derived from the whole fruit, including its tough skin, which contains much of its goodness. Now the pomegranate is renowned for the hard labour involved in eating it as you have to hack through the skin and the sacs which contain the seed-like ‘arils’ which hold the flavour. And so much of the best part of the fruit is discarded! So to get the best of the pomegranate, you need to source a juice pressed from the whole of the fruit, and that fruit needs to be organic or ‘wild-crafted’, i.e., foraged from naturally growing pomegranate trees. They may be difficult to eat, but they are very easy to drink.

So do yourself a favor – choose your juice wisely and go get juiced up! Why not prevent a problem rather than try to cure it? Make sure you choose fresh un-pasteurized juice which retains its life-giving vitamins