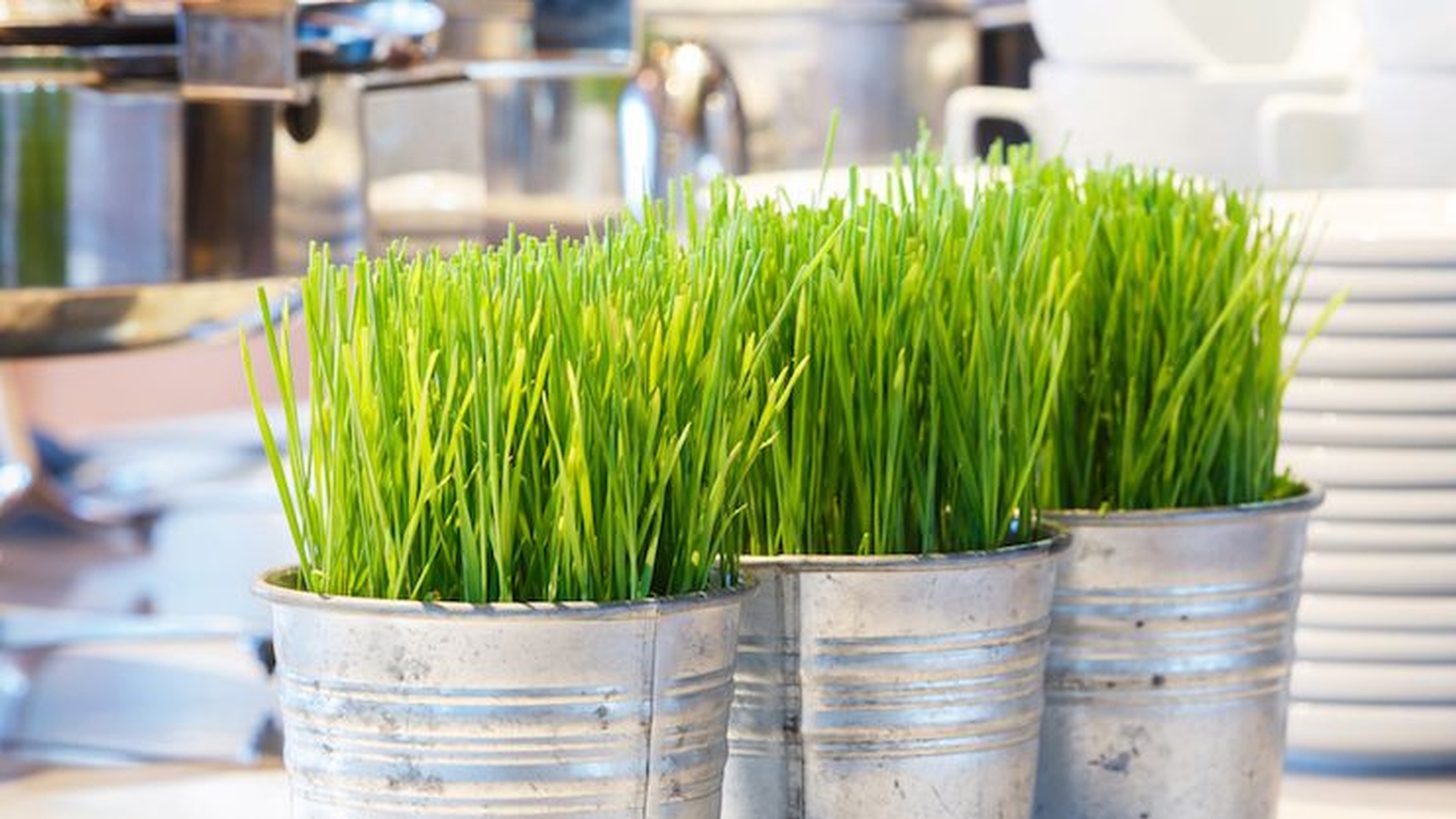 Wheatgrass is one of Natures purest of elixirs. As the name implies, it is part of the wheat family, however, it does not contain gluten. This is because wheatgrass has been sprouted and no longer carries gluten or other allergic agents. That means that it’s benefits can be enjoyed by celiacs and other gluten intolerance sufferers alike.

Often consumed freshly cut and juiced for optimal absorption and instant energy, wheatgrass is an amazing source of Vitamin A & C, amino acids like glutathione and is also made up of 70% chlorophyll. It has the ability to increase your red blood cell count all while cleansing the blood and organs and relieve gastro issues. This little green wheat is an amazing purifier, with its benefits being able to be felt and seen internal as well through that natural glow that comes with a cleansed well functioning body.

Here are 10 reasons why wheatgrass should become an essential part of your diet:

Oh, the ever-mighty Superfood - Food Matters Recommended Superfood Greens. The natural world's answer to Superman. Instead of fighting crime however, they are fighting against other enemies trying to combat our bodies like harmful bacterias, cholesterol, weak immunity and under active thyroids.  Their size often seems small when compared to what their nutritional benefits are for your body and overall health but just like the underdog in any movie, they should never be underestimated. Wheatgrass, in particular, is powerhouse little sprout packed full of Vitamins A, B, C, & E as well as amino acids and is made up of a whopping 70% chlorophyll.

Wheatgrass has the amazing ability to help purify the body, removing toxins, heavy metals and cancer-causing agents from the liver and bloodstream.

Wheatgrass enemas are considered one of the better forms of colonics, giving your body the ability to immediately absorb and retain all of the wonderful vitamins and nutrients it possesses. It has been used to relieve gastro-related issues because of its natural ability to promote healthy blood and purify the body.

4. It’ll Speed Up That Thyroid!

Wheatgrass stimulates the thyroid gland which helps boost your body’s metabolism and ability to lose weight.

In a 2010 study, results showed that when wheatgrass was introduced to a high-fat diet, it had a significant reduction in bad cholesterol as well as a positive improvement in good cholesterol (HDL). It also dilates the blood pathways which reduces blood pressure. The study also showed a significant rise in the appearance of Vitamin C and glutathione. Glutathione is one of our bodies most powerful antioxidants and is concentrated mostly in the liver, making it an essential part of the body's natural detoxifying processes.

Taking a shot of ‘grass’ is not appealing for most, especially if this is your first go at testing out the benefits of wheatgrass. Luckily, it has become a widely used superfood and can be consumed through a variety of methods. Fresh, powdered or in capsule form; there is an easy and convenient method for everyone. However, it is proven that having wheatgrass freshly juiced within 15 minutes is the best way to receive all of its amazing benefits.

7. It’s Benefits Are Still Being Discovered

More and more research is being done into linking the benefits of wheatgrass and its ability to prevent certain types of cancer, as well as help, improve the wellbeing of cancer sufferers. Studies done on the benefits of chlorophyll derivatives have linked this nutrient to have beneficial effects in liver, colon, stomach and gastrointestinal cancer cases. Being that wheatgrass is made up of 70% chlorophyll, more studies are being done to better understand this superfood and the optimal form to consume it to help in these cases.

8. Build Up Your Immunity Against Cold & Flu

With more Vitamin C than oranges and two times the amount of Vitamin A than carrots, adding wheatgrass into your diet during those bitter winter months will help as an extra fighter against the common cold, flu as well as preventing your body from contacting more serious threads of the same viruses such as bronchitis.  A 2oz shot packs all these benefits and is a natural alternative to getting a flu shot. Be sure not to overdo however it as some people have found that over-consumption of fresh wheatgrass has made them feel nauseous.

Having a 2oz shot of wheatgrass before exercise or soon after any form of physical activity can help with your endurance whilst performance high energy level activities. This is because of wheatgrasses ability to supply red blood cells to the whole body, which in turn oxygenates every cell and in turn, the body. This is what gives you a boost of energy and also helps fight against the environment around you such as smog.

10. It Can Help Purify the Air Around You!

Because of wheatgrasses ability to promote oxygenation within the body, it is also able to do so with the air around you. Place a tray of wheatgrass beside your bed to help promote a better night's sleep or have a tray at your desk to help purify that recycled office air, helping to keep you more alert.Felt The Health Benefits Of Wheatgrass?