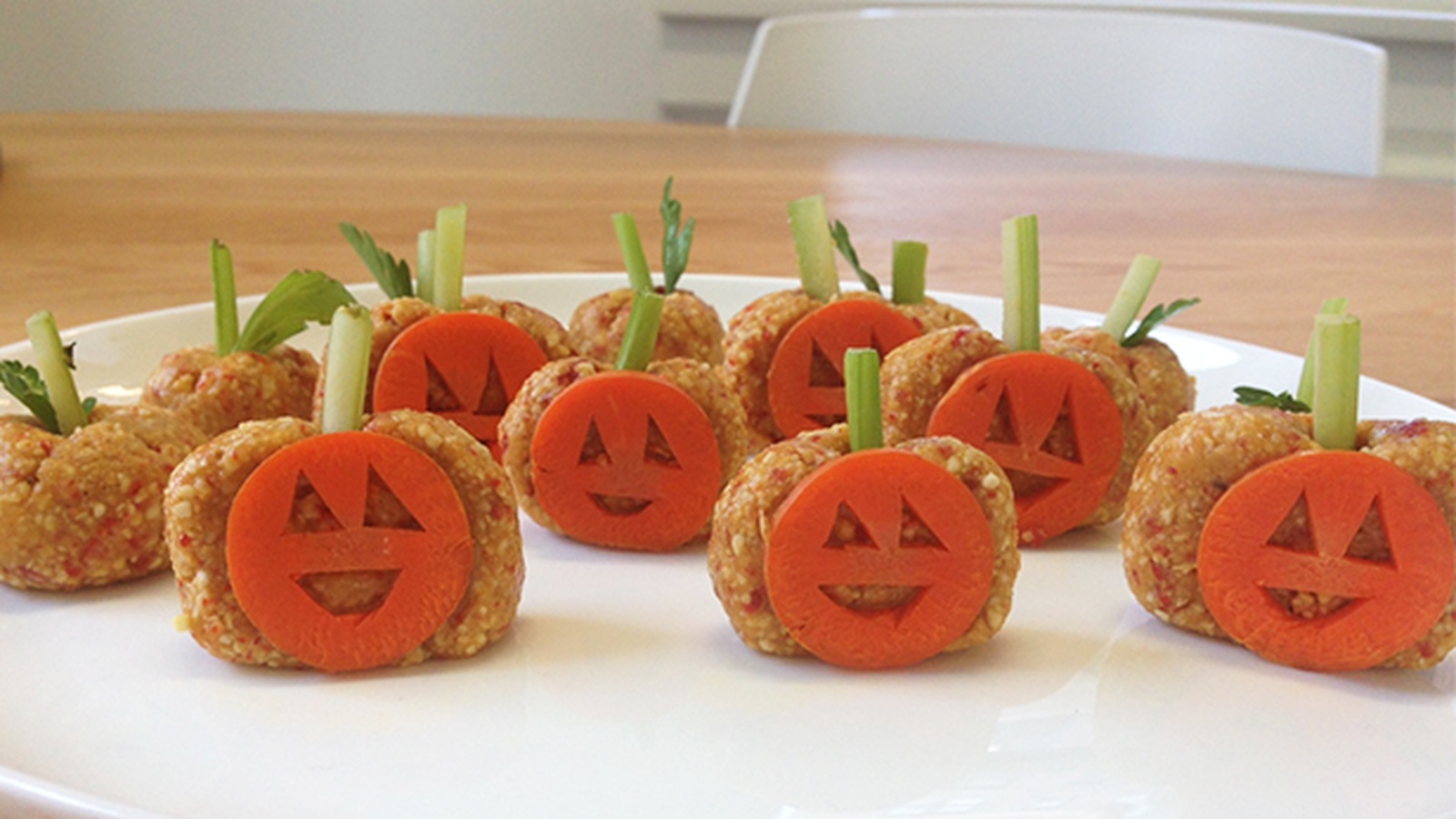 Who says Halloween can’t be healthy? Unfortunately for most, it isn’t. And I know for me personally, when I was growing up it definitely wasn’t! My brother and I would take our Halloween collecting skills very seriously. We would have a contest of who could collect the most, and when we got home it was a game of who could eat the most. I would also do everything in my power to hide my candy from my dad who always jokingly threatened to eat my Reese’s cups, which were my all-time favorite. I maybe would let him eat one every Halloween but that was it. Yikes. Sounds a little scary but I imagine that’s how it is in most households, but it doesn’t have to be. There are ways you can still enjoy the fun of Halloween, without going too overboard on the junk.

So, in the spirit of celebrating this youthful and fun holiday, I decided to get a little creative in the Reboot Kitchen this week.  I had candy pumpkins (the ones that are like candy corn) on the brain, and was thinking of ways I could make a healthy version. The outcome was a combination of little pumpkins, like you  find in a pumpkin patch, paired with “carved” pumpkins. At first I was struggling with “carving” my raw pumpkins. I tried adding raisins as eyes, a cashew for a mouth, and a cacao nib for a nose. They just weren’t coming out as I had planned. Then with the help of my colleague, Sarah, we were inspired by the enormous carrots we recently picked up at Whole Foods. By slicing the carrots into thin discs, I carved little faces into the carrot slice and then stuck them on the raw pumpkin to give them a face.

Not only are they super cute and a perfect addition to your Halloween party and as a healthy treat for your kids, but they taste so good too. Note: We ate the celery and carrot before eating the pumpkin part. Feel free to experiment with eating it all at once though!

1. Combine cashews, goji berries and rolled oats in food processor and process on high until a fine crumble forms.

3. Mix all ingredients together well until a dough forms.

4. For half of the mixture, roll small spoonfuls into little balls then shape them into pumpkins (that resemble candy pumpkins) by adding in little crevices with a sharp knife.

6. For the other half of the mixture, make these into the “carved” pumpkins. First, roll a small spoonful of dough into a ball, similar to the above, then flatten the sides and bottoms of the balls and shape into pumpkins, as you see in the picture.

7. For their face, slice a thin disc-shape from a large carrot, then use a sharp knife to carve a mini pumpkin face. These do not have to be perfect. As you can see from my picture below, they definitely look homemade but that gives them character!

8. Stick the carrot face onto one of the flat sides of the pumpkin then add a skinny celery stalk to the top.

9. Place all pumpkins in the fridge for 30 – 60 minutes before serving.

What healthy Halloween snacks have you created for your family and friends?