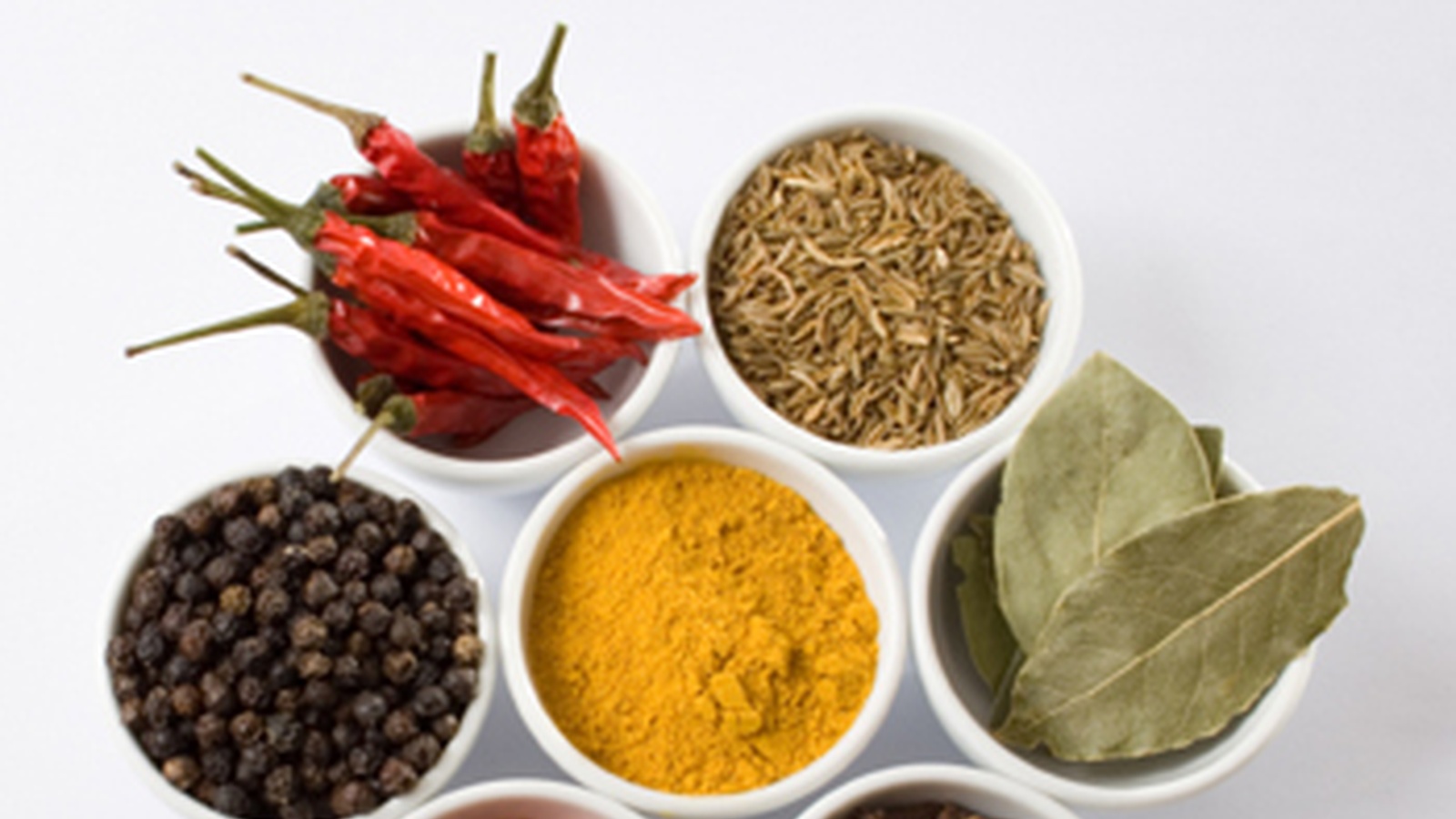 The Healing Power Of Spices

Humans have been using spices on their foods as far back as 50,000 B.C. But, beyond adding flavor, these dried seeds, fruits, root or bark can also add years to your life.
Spices are rich in phytonutrients and other active ingredients that protect against disease and promote healing. In worldwide studies, spices have been linked to the prevention and treatment of chronic conditions such as heart disease, cancer, Type II diabetes, and Alzheimer’s. Unlike pharmaceutical drugs, spices can be used long- term without concern for side effects.

In short, spices are among the great gifts nature has bestowed upon us.

Here are 3 common spices with numerous health benefits you might not have known about.

Vanilla (Vanilla fragrans) gets its name from Spanish vainilla meaning “little pod” because it comes from the thin, seed-containing pods of an edible tropical orchid plant. Possessing one of the world’s most enticing flavors, it is the world’s next most expensive spice after saffron and cardamom. It is also among the most popular – 10,000 tons a year – not enough to satisfy demand, which is why imitation vanilla has become a market necessity, though lacking the potency of the real stuff.

The orchid is a very sensuous flower and has an ancient reputation for enhancing romance. Hence, vanilla was often recommended as a tonic for virility, fertility and for aromatizing perfume, cigars and liqueurs. Native to Mexico, the Aztecs treated it as a medicinal charm, prescribed for hysteria and depression (so-called “women’s troubles”), as well as for patients coughing up blood. In 18th century Europe it was popular as a nerve stimulant. 19th Century American medical texts praised its powers to “exhilarate the brain,…increase muscular energy, and stimulate the sexual energies.”

Today, especially in the last two decades, vanilla has been the subject of much scientific investigation because its seeds contain over 200 phytonutrients – bioactive plant compounds which have healing potential for many conditions. Its most studied main constituent, vanillin, which produces the mellow fragrance, has shown promise in cancer and sickle cell anemia. True to its ancient heritage, the spice also has proven aphrodisiac ability – in treating impotency, frigidity, erectile dysfunction and loss of libido – and is valued as an anti-depressant, anti-inflammatory and for its general relaxing and calming effect on the brain and nerves, relieving anxiety and anger.

Cancer: Numerous studies have demonstrated that vanillin, the major component of vanilla, has anti-carcinogenic properties, killing human cancer cells, limiting metastasis (movement of cancer cells from the original site to the rest of the body), inhibiting angiogenesis (creation of new blood supply for tumor). Bromovanin, a vanillin derivative, has been found to stop the advance of a broad spectrum of human cancers. Research at New York University School of Medicine concluded that vanillin is antimutagenic – in human cells it reduced by up to 73% the ability of toxins to mutate DNA in 64 genes that may play a role in cancer.

Sickle Cell Anemia: This inherited, incurable condition warps the round, flexible shape of oxygen-carrying red blood cells into rigid, sticky “sickles,” slices of cells like crescent moons. Misshapen cells snag and stall in the bloodstream, choking blood and oxygen flow, producing pain and fatigue, the main symptoms of the disease. In studies at Children’s Hospital of Philadelphia, a vanillin-derived drug on mice with the disease “significantly reduced” the % of sickled cells. Human studies are in the works.

Aphrodisiac: Since the time of the Aztecs, vanilla has been considered an aphrodisiac, now confirmed by science. A systematic administration of vanilla essential oil to patients with impotency, erectile dysfunction, frigidity, loss of libido, etc., has been proven to relieve these conditions. This oil stimulates secretion of certain hormones like testosterone, estrogen, etc., which can help bring about normal sexual behavior, as well as promote arousal. The oil has also been shown to regularize menstruation by activating certain hormones like estrogen and progesterone.

Anti-depressant: Vanilla essential oil with its soft, rich aroma is an effective mood up-lifter. Perhaps this is why “plain” vanilla ice cream is the most universally popular flavor!

Sedative: The essential oil of vanilla soothes all types of inflammations and hyperactivity in body systems, particularly the respiratory, circulatory, digestive, nervous and eliminations systems.These relaxant properties can alleviate insomnia, as well as lower blood pressure. In general, the oil has a calming effect on the brain and nerves, giving relief from convulsions, anxiety, stress, anger, hypersensitivity, restlessness, etc. 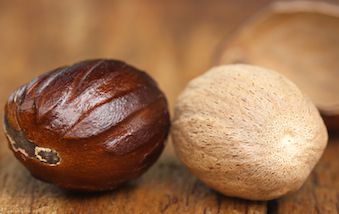 Nutmeg (Myristica fragrans), a nut-like pit or seed, got its English name from Latin nux, meaning nut, and muscat, musky. From the 14th-18th centuries, nutmeg was at the center of the bloody spice wars as the Dutch, Portuguese, French, and English fought over the “spice islands,” the Moluccas in Indonesia, until the English realized they could grow nutmeg trees on their own turf – the Caribbean. Today the Moluccas and Grenada are the largest world suppliers.

Nutmeg has a taste unlike any other in the world. Its intense, musky-sweet flavor comes from myristicin, a volatile oil also found in plants (carrots, celery, parsley), but most abundantly in nutmeg. Today, this oil and other compounds in the spice are the subject of much scientific research, thus far showing promise in pain relief, lowering cholesterol, improving memory and sexual desire, relieving anxiety, indigestion, even reducing wrinkles.

Nutmeg also has a reputation, now confirmed by animal studies, as an inexpensive narcotic (”a cheap high”). However, to feel any effect one would have to consume a heck of a lot: about 2 ounces, an impossible amount to eat in normal food where a teaspoon suffices for a whole cheesecake – which is probably why we never hear of drug enforcement raids on spice cabinets! It’s also why experimentation is a very bad idea – there are more than a few cases of fatal nutmeg poisoning in people who did!

As mentioned, large amounts of nutmeg can be toxic. It is considered safe, however, when used for culinary purposes, even in generous amounts.

Anxiety: Nutmeg is a relaxant, used in folk medicine to relieve anxiety and depression. Animal studies in India found that nutmeg had an effectiveness similar to common anti- anxiety drugs in alleviating symptoms. The spice also “significantly improved” learning and memory.

Wrinkles: Of 150 plants tested, nutmeg was one of 6 plants found to contain compounds that could inhibit elastase, an enzyme that breaks down elastin, the protein fibers that keep skin youthfully taut and flexible (if elastin breaks down, skin sags). When added to cosmetics, the researchers, reporting in International Journal of Cosmetic Science, concluded that nutmeg has “anti-aging effects on human skin.” A Korean study, found nutmeg protected skin from the sun’s damaging UVB rays.

Sexual desire: Nutmeg is a central nervous stimulant. In ancient Greek medicine it was considered an aphrodisiac, as it is today in India and Pakistan. Investigating this premise, researchers in Journal BMC Complementary and Alternative Medicine found that when experimental animals were fed nutmeg, they went nuts: “The resultant significant and sustained increase in sexual activity indicated that extract of nutmeg possesses aphrodisiac activity, increasing libido.” 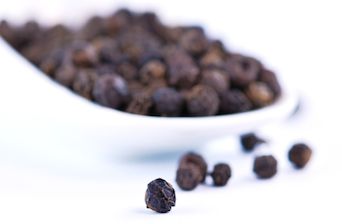 Black pepper (Piper nigrum) bears the royal pedigree, “King of Spices.” In early times, it was more valuable than gold. Only the wealthy could afford it; dowries were endowed with it and many bribes for special favors were paid with it.

Black peppercorns were found stuffed in the nostrils of Ramesses II, part of the mummification ritual after his death in 1213 B.C. In classical times, both Attila the Hun and Alaric I the Visigoth insisted on pepper as a large part of Rome’s ransom. In 1492, demand for it was one of the main reasons Queen Isabella sent Columbus west in search of a new route to the Indies. As fate would have it, he ended up discovering a new continent, but 8,000 miles off from the “land of peppers” – India’s Malabar Coast where the spice has thrived for over 4,000 years.

So why all the hoopla? Pepper hasn’t the instant allure of a juicy, aromatic fruit or berry, nor the glitter of gold or other precious stones. The one irresistible quality of this drab, wrinkled little bead is its particular pungent flavor that can perk up the dullest of dishes and, thereby, unleash it’s considerable curative powers. In pre-modern times it was believed to alleviate a whole host of ills, from constipation, earache, insect bites to hernia, gangrene, arthritis, heart and lung disease.

Today researchers are learning that the ancients were onto something. The sharp flavor and healing prowess come from piperine and other volatile oils in the pepper. It’s the piperine that zaps the taste buds, often triggering a sneeze when it hits the nerve endings inside your nose. Studies are finding that piperine can be effective in treating a vast array of conditions, including cancer, digestive disorders, heart disease, high blood pressure, loss of hearing, quitting smoking, and more.

Digestion: Piperine stimulates the taste buds, triggering the pancreas to start producing digestive enzymes. It also tones the lining of the intestines which boosts digestive power in numerous ways, including more efficient absorption of foods and faster transit time. In a study in the Journal of the American College of Nutrition, gastroenterologists found that 1.5 grams of black pepper (about 1/20 ounce) sped up the time it takes for food to move all the way through the GI tract. Slow transit time is linked to many problems, from constipation to colon cancer. The researchers concluded that black pepper “is of clinical importance in the management of various gastrointestinal disorders.” Black pepper has also been shown to relieve flatulence and calm nausea. (Precaution: black pepper is not recommended post abdominal surgery or for ulcer patients.)

Cancer: Lab studies have shown that piperine may play a role in preventing or treating cancer. Researchers discovered that regular use of black pepper inhibited growth of human colon cancer cells. In animal studies on lung cancer, piperine changed the level of several enzymes, producing an anti-tumor effect. Black pepper extracts added to the diet of mice with breast cancer increased lifespan by 65%.

Better brains: The same team discovered that piperine had “anti-depression-like activity and cognitive-enhancing effect” when fed to lab animals, leading them to conclude that piperine may “improve brain function.”

Improve balance in elderly: Japanese studies found that sniffing black pepper oil stabilized the ability to stand, lowering the risk of falling in people aged 78 and older. As reported in the journal Gait and Posture, “Olfactory stimulation with black pepper may improve postural stability in older adults.”

Quit smoking: Scientists at the Nicotine Research Laboratory in Durham, NC, discovered that the craving for cigarettes decreased after smokers puffed on a vapor containing black pepper essential oil. In the journal Drug and Alcohol Dependency, they wrote: “Cigarette substitutes delivering pepper constituents may prove useful in smoking cessation treatment.”

Protect hearing: Korean studies noted that piperine protected cells in the cochlea (the sensory organ of hearing in the ear) from chemical damage. Cochlear damage leads to hearing loss.