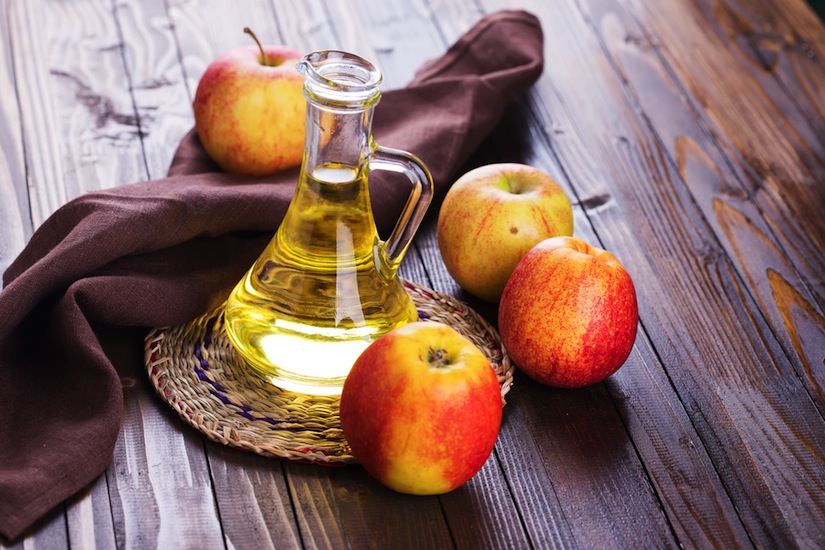 Results of a research study in Japan suggest that acetic acid may help control blood pressure and fat accumulation. Investigators in Europe looked at the influence of sodium acetate and acetic acid on blood glucose and other biological responses to a mixed meal in healthy subjects.

But acetic acid is not vinegar, it is a bacteria found in vinegar that is a byproduct of the fermentation process and as you go along this article, you’ll find out that this bacteria is responsible for the other benefits below.

There are vinegar manufacturers that remove the “mother” using a filtration process but if you’re thinking of consuming this or adding it to a juice recipe, avoid using distilled vinegar but opt for the raw, unfiltered variety that contains the mother. This ingredient is responsible for the tart flavor and the biting odor of vinegar. Acetic acid content in vinegar varies between 4 to 7% in distilled vinegar and 5 to 6% in wine vinegar. Bragg unfiltered ACV (one of the more popular brands) contains 5.14% of acetic acid.

Tip: The FDA says that diluted acetic acid is not vinegar and should not be added into any food product that is expected to contain vinegar.

Cancer is a silent killer in that the symptoms don’t manifest itself until it is in a stage where there is little that you can do to cure it. In 2014 over 1.6 million people in the United States tested positive for cancer and there were over half a million deaths (it is the 4th common cause of death in the USA). Research has shown that vinegar can at least shrink and kill some types of cancer cells.

One study was done in China, where they discovered that vegetable and vinegar consumption reduced the risk of oesophageal cancer. However in a separate study done in Serbia, results showed that vinegar consumption increased bladder cancer 4.4 times. Based on these studies, vinegar is found to have anti-tumor properties thanks to the acetic acid bacteria but may provide various effects depending on the type of cancer.

3. It is a Proven Disinfectant and Bacteria Killer

Before any scientific study was done, Hippocrates has been using vinegar to treat wounds over 2,000 years ago and modern research has proven that vinegar can kill some types of bacteria like E. coli and S. aureus. It isn’t as effective as commercial products like Clorox, but it does not have chemicals in it so it is safe to use in washing produce and is also known as a natural food preservative.

One of the biggest risk factors of having high cholesterol is it can lead to various heart ailments. Once bad cholesterol clogs the arteries, there is a huge risk of cardiac arrest.

Apple cider vinegar can help lower because it contains chlorogenic acids that help lower LDL or bad cholesterol, preventing it from accumulating and crystalizing in the bloodstream. Take note that the research done was only done to rats which may or may not translate to same results on humans. One study was done on over 70,000 women showed that an increased intake of oil and vinegar salad dressing reduced the risk of ischemic heart disease.

5. Prevents the onset of Diabetes by lowering Postprandial Glycemia

For those who don’t know postprandial glycemia simply refers to the elevated blood sugar levels that occur after a meal – this is a big factor why pre-diabetics progress to type 2 diabetics.The term pre-diabetes means that an individual has elevated blood glucose levels but not high enough to be considered as type-2 diabetes. If left undiagnosed it can lead to type 2 diabetes in 10 years or less. Researchers from Arizona University found out that drinking vinegar juice that included 20 grams of apple cider vinegar, 49 grams of water and 1 teaspoon of saccharine after a meal (bagel and orange juice) resulted in a 35% decrease.

Another way to lower down postprandial glycemia is walking around for 15 minutes after a meal instead of sitting down like most of us do.

In a test done on 100 teeth that were exposed to the E. faecalis, bacteria had shown that apple cider vinegar was able to reduce bacterial count but not completely remove it. The test was done on teeth extracted through a root canal and not live teeth inside the mouth.

In a study done by the American Diabetes Association in 2004, 3 groups of people were given a concoction of 20 grams apple cider vinegar, 40 grams of water and a teaspoon of saccharine and after 2 minutes were given a meal that consisted of a white bagel, orange juice and butter.

These 3 groups include people with type 2 diabetes and non-diabetic individuals who are either insulin sensitive (these are control subjects) or insulin resistant. 29 people in all participated in the study.

The study revealed that apple cider vinegar increased insulin sensitivity in insulin-resistant individuals by 34% and type 2 diabetics by 19% [20]. Dr. Mercola who also cited the study said that the type 2 diabetics who participated in the study improved blood glucose levels by 25% while pre-diabetics had lower blood glucose compared to healthy individuals (control subjects) who participated.

8. Vinegar Can Help in Losing Weight

There has been a new study done by Japanese researchers that acetic acid found in vinegar could prevent the accumulation of body fat. One test was done with mice, the other with people.

Test done on people: 175 obese but healthy people were divided into two groups. Both groups had a similar diet but one group had plain water and the other had some vinegar. At the end of 12 weeks the people who had the vinegar lost an average of 1 to 2 pounds. But whilst vinegar may have properties that can break down fats, nothing beats exercise and eating the right food to really shift any excess weight!

There are so many uses for apple cider vinegar it seems like the benefits are endless! We’re sure as more studies are done that this ancient liquid will have so many more of it’s claims proven and we can’t wait to discover more benefits of this golden multi-purpose vinegar! In fact, here are 25 more things you never knew you could do with apple cider vinegar!

What Are Your Favorite Ways To Use Apple Cider Vinegar?