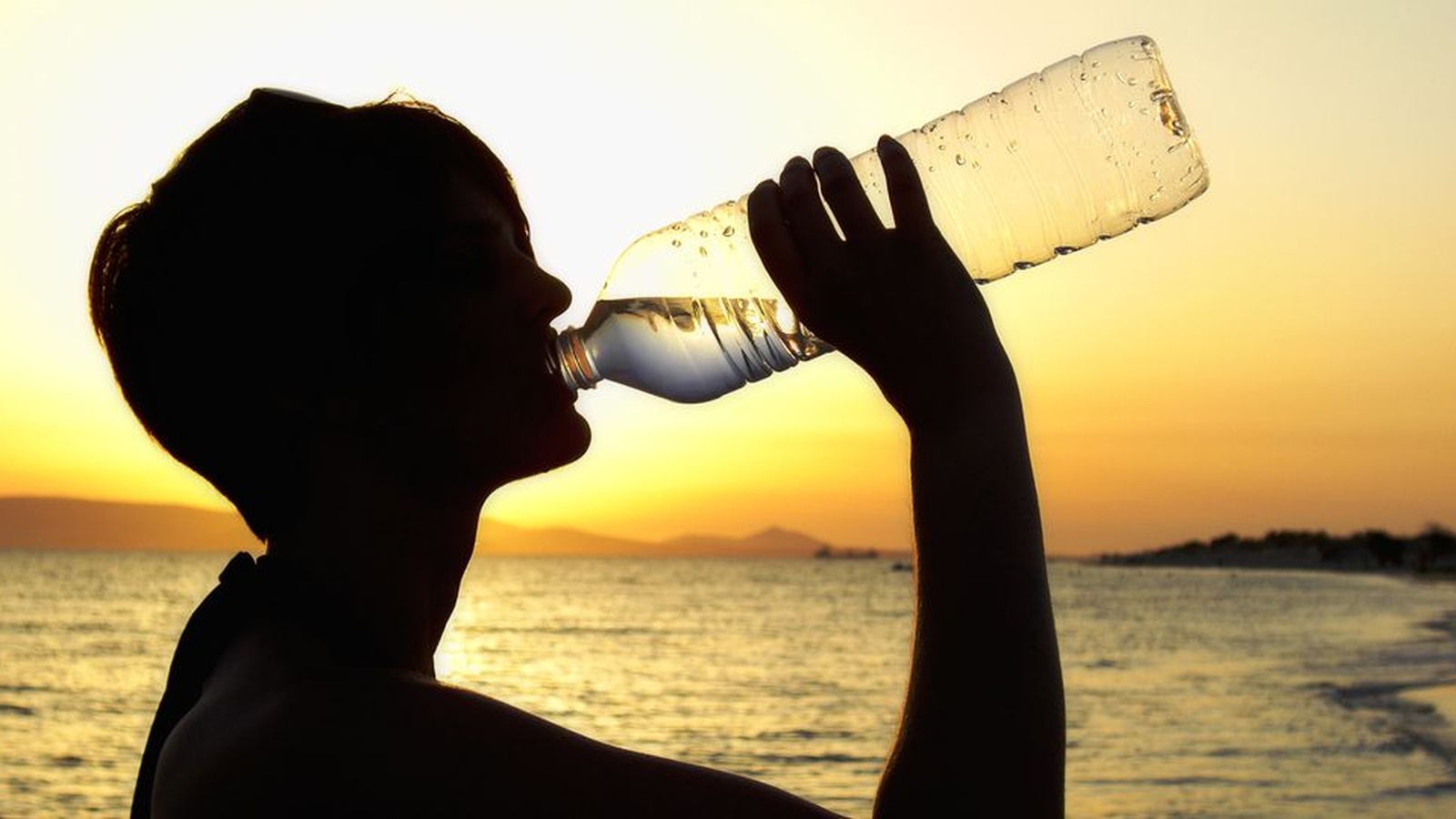 Are You Chronically Dehydrated

"Chronic pains of the body which cannot easily be explained as injury or infection, should first and foremost be interpreted as signals of chronic water shortage in the area where the pain is registered. These pain signals should first be considered and excluded as primary indicators for dehydration of the body before any other complicated procedures are forced on the patient." - Dr F Batmanghelidj

The human body is a bio-electrical water machine that requires a quart a day for every 50 lbs of body weight. The blood alone is made up of a large percentage of watery serum. The lymph fluids which transport waste and nutrients, comprising four times the volume of blood in the body, are made from the water we consume. Every cell that makes us who we are literally owes its life to an adequate supply of fresh, clean water.

When the body does not receive a constant, reliable supply of water, it has to ration what is available and cut back on certain functions to make the supply go round. Essential systems like the brain are prioritised, others are impaired or cut back until the brain has decided a reliable source of water has been garnered.

Here's the rub. Most citizens have become chronically and dangerously dehydrated (especially the elderly), since we decided water was too bland to drink and ignored it in favour of tea, coffee, beer, wine, addictive sodas, flavoured water and other chemical-laced water alternatives. A disastrous and dangerous move for the body and society's health in general, to be sure, compounded further since most doctors today cannot readily identify the many water-deficient diseases and associated pains. Thus the underlying dehydration process continues to wreak its havoc while the inevitable drugs given will switch off the warning signals (symptoms).

Are all of these conditions linked to a chronic state of dehydration?

World-renowned water expert Dr Fereydoon Batmanghelidj, in his latest bestseller, "Water and Salt - Your Healers From Within", maintains that the above conditions are the body's many cries for water, and complaints dramatically improved with a consistent and long-term intake of the fresh, clean water. Dr Batman's timely work has helped thousands quash long-term health problems effortlessly and inexpensively.

He writes: "The report of my having successfully treated with water more than three thousand people with symptoms and clinical signs of peptic ulcer disease was published in the Journal of Clinical Gastroenterology in June 1983. I came away from that experience with the understanding that the people I treated were thirsty, and I uncovered the phenomenon that 'pain' in the body indicates thirst, even though the condition is classified as a disease." Water is used by the body for digestion, detoxifying cells, watering the lungs, lubricating joints, keeping the body alkalized and a host of cleaning duties.

Many warning signals ('symptoms') arise out of the body's inability to neutralize or rid itself of acid, a common enough complaint given the number of antacids sold around the world each day.

'I drink coffee, tea, diet sodas, beer and a host of other liquids. They contain water, don't they?'

This is a common and dangerous misconception. Many of today's designer drinks are diuretic in their effect (water-expelling) because their mostly acidic compositions require the body to give up water and alkalizing minerals to eliminate their harmful residues. Diet sodas especially are harmful in that they require large amounts of body-water to neutralize the phosphoric acid component (2.8 pH). Cells that started off healthy and 'plum-like' shrivel to prunes as water, the stuff of life, is progressively denied them. The sick in our hospitals are fed the sodas, tea and coffee they ask for in woeful ignorance of the damage wrought to the micro cell-world within them.

Batmanghelidj's extraordinary work should rightly be considered by a mainstream medical community ever fixated on the drug cure. Below is a summary of body functions and that rely on an adequate intake of water:

The brain comprises 2% of the body's total weight, yet receives 15-20% of the blood supply, mostly comprised of water. Dehydration will affect cognitive ability drastically, and, through histamine's action, can create depressive states (many anti-depressant medications are anti-histamines).

Bones require plentiful supplies of water. 75% of the weight of the upper body, for instance, is supported by the water core contained within the fifth lumbar disc, the remaining 25% by muscle fibers around the spine.

Microstreams exist along the length of nerves which transport nutrients and conduct energy along microtubules to the synapses to transmit messages. Dehydration disrupts proper nerve function, resulting in the sensation of pain.

Water, far from being an inert solvent, is intricately involved in the body's water-dependent chemical reactions. Lack of water means incomplete or faulty metabolic processes, with obvious implications for continued health and well-being. Proteins and enzymes, for instance, do not function as well in acidic solutions of higher viscosity (stickiness) where the body is dehydrated.

As water is drawn through the cell membrane, its osmotic flow generates a voltage gradient which can be used in the manufacture of ATP and GTP energy. Dehydration will obviously affect the proper functioning of cells and even kill them.

This neurotransmitter plays a major role in activating systems which encourage water intake when dehydration is detected. Functions in the body which consume large quantities of water are cut back, namely the bronchial tubes constricted to cut down on water use in the lungs; increased peristalsis in the bowels to wring more water out of fecal material, and so on. Other signs of histamine's activity, namely allergies, asthma, depression and chronic pains, are interpreted by the physician as 'disease' and treated with anti-histamines, pain-killers (analgesics), etc. Thus the signals of thirst are turned off and the dehydration state continues unabated.

Over time, this can lead to ulceration and even cancer. Dr Batmanghelidj recommends that these conditions - also gastritis and duodenitis - be treated with water alone as they are one of the body's major thirst signals. Arrested in his native Iran by the Revolutionary Council during the troubles of the late 1970's, Dr B was confined to Evin prison, Tehran, during which time he successfully treated with water alone over three thousand people complaining of dyspeptic pain and associated symptoms.

Requires plentiful supplies of water. The stomach relies on mucus lining the walls to shield it from the effects of the stomach's hydrochloric acid. A bicarbonate solution is produced from the cells in the lining which neutralizes any acid attempting to break through the mucus. Water is needed to maintain this effective defense system. Too little water, and the mucus barrier is ineffectual, the acid will penetrate and will lead to pain. Ideally, water should be consumed half an hour before a meal, in time to anticipate the production of digestive acid from glands in the stomach wall.

Often located at the valve between the stomach and duodenum. Said to be caused by curved bacteria known as helicobacters. Yet many people have helicobacters in their small intestine, yet not all of them suffer from ulcers. Histamine-producing nerves are located at this site, which monitor the through-put of acidic food chyme from the stomach into the intestine. Histamine has growth-hormone effects on these micro-organisms, resulting in small intestine bacterial overgrowths (SIBOs). Once again, an adequate regime of water intake will allow all the functions relating to digestion to normalize. Prolonged water intake should therefore be considered before more drastic drug treatments are entered into.

Have You Experienced Chronic Dehydration? Share Your Experience Below!