When thinking about hunger worldwide, what do you envisage? A child in Ethiopia? An aging man in Somalia? Or a family in poverty-stricken India?

So asks the eye-opening new documentary, 'Hunger In America', a movie which will change your whole perception on what hunger looks like.

Blowing wide open the idea of who is going hungry in today’s modern age, this thought-provoking documentary reveals an enormous problem far closer to home than we ever could have imagined.

Written and directed by Zac Adams and narrated by James Denton, the movie begins by looking at what we all know – that hunger tragically kills thousands of people every day in third world countries. That’s more people every year than AIDS, Malaria and Tuberculosis combined. Shocking.

However, what is equally as shocking, is that the film goes on to reveal how this epidemic is rife in the world’s most prosperous nation. 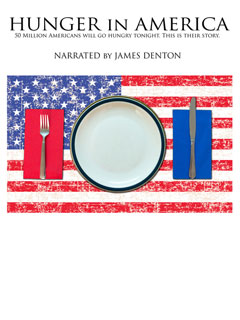 According to the movie, one in six people in America today, including hard-working men and women, suburban families and young children, are struggling with hunger. Your neighbor, your sister, your nephew, or your best friend might be suffering, and you wouldn’t even realize.

Looking at why this might be the case, Zac Adams explores the various issues involved, such as malnutrition, lifting the lid on why bad food is cheap. Exposing the government’s subsidy of the corn, wheat and soy industries, Adams unveils how high fructose corn syrup, fluffy white buns and corn-fed meat are everywhere in fast food.

“That food isn’t really getting into their cells,” adds Donna Gates of The Body Ecology Diet. “It isn’t really nourishing them at all.”

As a father to Hugo, this sad fact is one that weighs heavily on my mind. The long-term impact of hunger and poor food choices on a child’s ability to thrive and succeed is known to be significant.

The lack of access to healthy foods such as whole grains and fresh fruit and vegetables, despite a national food surplus, is a key message of the film, and one which has me nodding in agreement all the way through.

It’s time we all understood what the face of hunger really looks like. As the movie states, 50 million Americans go to bed hungry every night.

This is their story.


Join us over at FMTV for the WORLD PREMIERE of 'Hunger In America'. No more wasting time scouring the internet for the latest film or obscure health doc. We've got you covered, bringing you the best of the best (and leaving the rest). Ever since we started Food Matters back in 2007 to heal my father, we became convinced about the power of real food and the body's own innate healing capacity. We saw firsthand that with access to solid information you can make better decisions for your health. It was through this experience that FMTV was born.