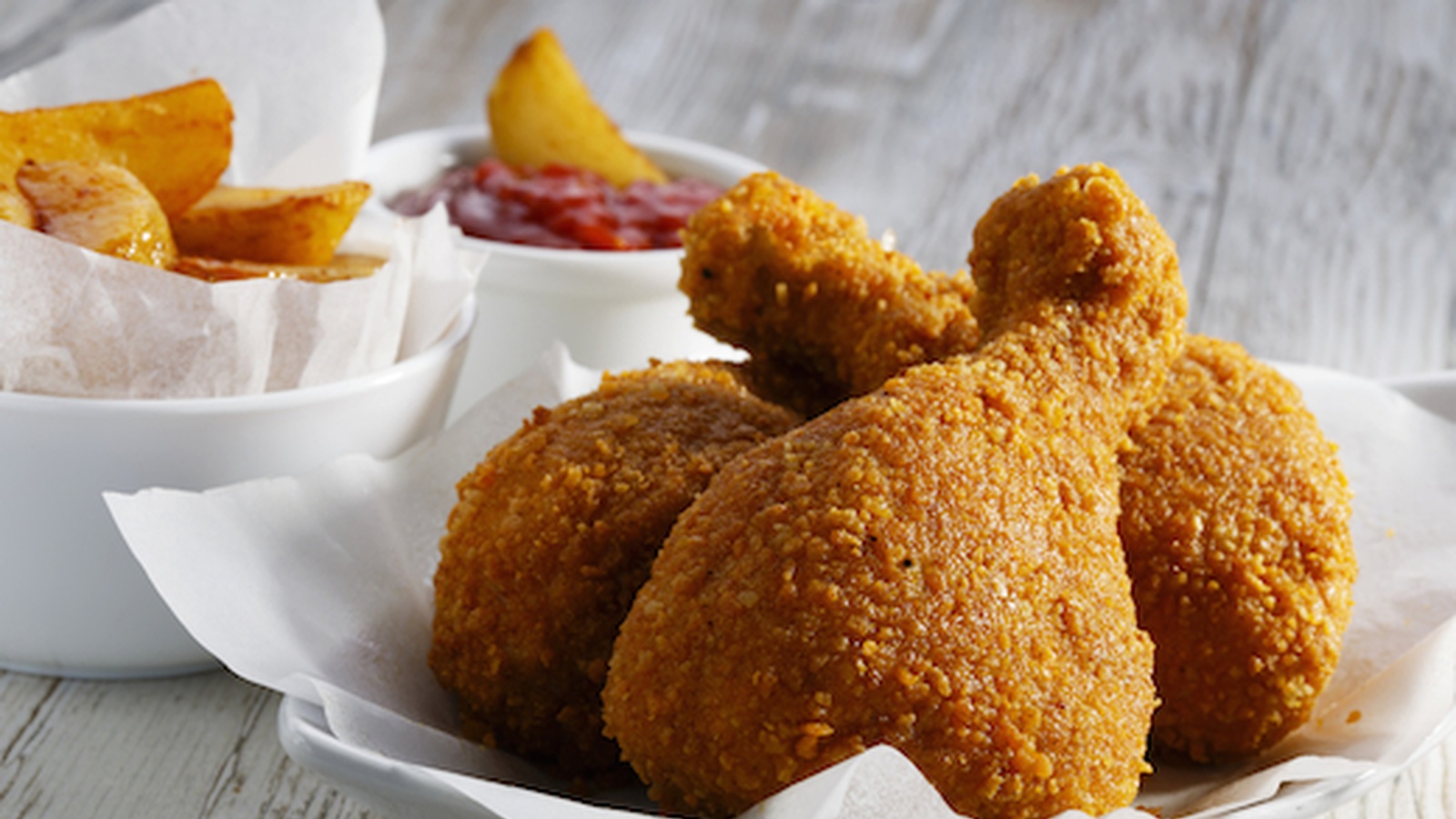 The idea that buying fried chicken is actually going to cure cancer is one of the most utterly idiotic health ideas yet witnessed in American pop culture. ‘Komen for the Cure’ (ww5.komen.org) has aligned with KFC to raise funds for breast cancer cure research. Eat more fried chicken, folks, and then what? Loading up on that kind of a diet is more likely to cause you to kick the bucket than to find a cure for cancer.

So now we've got Susan G. Komen for the Cure actually promoting foods that promote cancer. It just boggles the mind, but it's entirely consistent with what I've said about Komen for the Cure in the past: The organization is a drug-company-funded front group that actually promotes cancer in my opinion. I see it as engaged in outright fraud by scamming consumers out of their money while claiming to be "searching for a cure" when, in reality, most of the money raised by the group actually goes to pay for more mammograms that cause cancer.

If Susan G. Komen for the Cure were using such tactics to promote herbal remedies, it would have been shut down and its executives arrested long ago as fraudulent quacks. But because the group is so strongly aligned with the profiteering, powerful drug companies, it continues to get away with these utterly fraudulent marketing gimmicks without suffering a single investigation from the FTC, Dept. of Justice or even any mainstream newspaper.

Why is it that Komen for the Cure can actually promote products that cause cancer and no one seems to notice the outright hypocrisy? Why aren't the quack-watching websites screaming about the quackery of selling cancer-causing foods to raise money to fight cancer? Why isn't 20/20 or 60 Minutes or some other television investigative show taking a look at the outright fraud being perpetrated against consumers? Where are the comedian hosts of the show "B.S." when it comes to exposing the fraud and quackery of the cancer industry?

The silence tells you everything: The cancer industry gets a free pass. As long as these organizations run around toting pink ribbons, they can get away with anything... including fraud.

The cruelty of Susan G. Komen for the Cure

It's not just about fried chicken promoting cancer, by the way. By linking up with KFC, Susan G. Komen is also promoting extreme animal cruelty.

Undercover investigations of KFC chicken suppliers, conducted by PETA (www.PETA.org), have shown chickens being beaten, thrown against walls, abused and even spray-painted by malicious workers.

The website www.KentuckyFriedCruelty.com reveals the horrifying details of how KFC suppliers treat chickens before they are served up to consumers in pink "Komen for the Cure" buckets:

"KFC suppliers cram birds into huge waste-filled factories, breed and drug them to grow so large that they can't even walk, and often break their wings and legs. At slaughter, the birds' throats are slit and they are dropped into tanks of scalding-hot water -- often while they are still conscious. It would be illegal for KFC to abuse dogs, cats, pigs, or cows in these ways. KFC's own animal welfare advisors have asked the company to take steps to eliminate these abuses, but KFC refuses to do so. Many advisors have now resigned in frustration."

The actions of KFC suppliers against chicken are so unbelievably cruel and inhumane that even the Dalai Lama has spoken out against it. Celebrities like Pamela Anderson have boycotted KFC, saying: "Cruelty is cruelty, and KFC is being cruel in the extreme. I am calling for a boycott of all KFC restaurants until my friends at PETA tell me that you have agreed to be kinder in your practices."

All those speaking out against KFC cruelty include His Holiness the Dalai Lama, Phil Collins, Fall Out Boy, Pink, Paul McCartney, The Black Eyed Peas, the National Association for the Advancement of Colored People (NAACP) President and CEO Kweisi Mfume, among others.

Undercover investigations of KFC have also exposed some extremely disturbing cases of bizarre cruelty. As explained at http://www.kentuckyfriedcruelty.com...

"Every time undercover investigators enter the facilities of KFC's suppliers, they find hideous abuse and suffering. At one KFC 'Supplier of the Year' slaughterhouse in West Virginia, workers were caught tearing birds' heads off, ripping them apart, spitting tobacco into their eyes, spray-painting their faces, and throwing them against walls -- all while the birds were still conscious and able to feel pain."

By allying itself with KFC, Susan G. Komen for the Cure is endorsing animal cruelty. It is promoting an extremely unhealthy product line containing chemicals linked to cancer, and it's doing all this under the fraudulent marketing claim of "raising money to cure cancer."

But the story gets even more disturbing when you look at the ingredients in KFC foods...

The toxic ingredients in KFC foods

Kentucky Fried Chicken is one of the fast food industry's largest users of MSG. This taste-exciting chemical (excitotoxin) is found in so many of KFCs products that it's nearly impossible to eat a typical meal at KFC without ingesting it.

KFC has also traditionally used oils containing trans fats, thereby exposing its customers to ingredients that promote heart disease. A few years ago, the CSPI filed a lawsuit against KFC to try to force it to switch to trans-fat-free oils. The result?

"In October 2006, KFC announced that it would begin frying its chicken in trans fat-free oil. This would also apply to their potato wedges and other fried foods, however, the biscuits, macaroni and cheese, and mashed potatoes would still contain trans fat. Trans fat-free soybean oil was introduced in all KFC restaurants in the U.S. by April 30, 2007." (http://en.wikipedia.org/wiki/KFC)

What's interesting about all this is that even the founder of KFC, Colonel Sanders, was strongly critical of the way the corporate profiteers altered his original recipe after buying the company. KFC was bought out in 1964, and Colonel Sanders soon said this:

"They prostituted every goddamn thing I had. I had the greatest gravy in the world and those sons of bitches -- they dragged it out and extended it and watered it down that I'm so goddamn mad." (Ritzer, George, 2004. The McDondaldization of Society. New York: Pine Forge Press. p. 64.)

What other chemical ingredients might you find in KFC foods? The company actually publishes a list of ingredients for its menu items. I went through that list and found all the following ingredients on the KFC menu:

Just so you know how all these chemicals come together, here's an ingredients list from just ONE product on the KFC menu: Boneless Wings. See if you can count how many times MSG appears in this recipe: (emphasis added)

Add all this up, and you get a frightening picture of what Susan G. Komen for the Cure actually stands for. By aligning itself with KFC:

I believe that Susan G. Komen for the Cure is a cancer industry front group that actually promotes cancer, disease and destruction. It seems to me that the group has no intention of ever curing anything. The word "cure" is just a marketing gimmick used to extract money from gullible consumers. Conventional medicine doesn't even believe in a cure for cancer!

Notice, too, how Komen for the Cure absolutely refuses to teach women about vitamin D? Where is the anti-cancer nutrition message that could help women prevent breast cancer? It's nowhere to be found. Instead of teaching women how to be healthy, Komen for the Cure is out there promoting buckets of fried chicken laced with MSG.

Of course, it's all good business for the drug companies and medical imaging companies that give money to Komen for the Cure. The organization's biggest sponsors are -- surprise! -- the corporations that profit from cancer through chemotherapy and radiation. To them, Komen for the Cure isn't really about finding a cure for cancer; it's about promoting cancer so that they can sell more drugs and radiotherapy that keeps more patients locked into a cycle of dependence on toxic cancer treatments.

See, if you want to cause cancer, one way to do it is to irradiate women's breasts with mammogram machines. Another way is to promote foods laced with chemicals that cause cancer. Susan G. Komen for the Cure does both.

That's really the whole theme of the pink ribbon cancer industry fraud anyway, isn't it? Stop thinking. Just buy crap. If it's pink, just buy it. Don't even think about it. Don't ask questions like "Where is this money going" or "How does this money actually help cure cancer?" Or, relevant to this article, "How does eating fried chicken cure breast cancer?"

Because if you ask those question, you'll get some surprising answers: The cancer industry isn't even looking for cures for cancer, folks. The cancer scam is just too profitable. It's a sweet gig and they're raking in billions of dollars from gullible consumers who continue to be victimized by this fraudulent cancer industry and its dishonest non-profit front groups.

This whole idea that you can cure cancer by ordering junk at fast food restaurants is so ludicrous and retarded that when I first saw this, I thought for sure it was a late April Fool's joke. But no, this is no joke. The reputation of Komen for the Cure may be a joke now, but the "Buckets for the Cure" campaign is quite real. These silly people are seriously fronting buckets of fried chicken and claiming that if you keep eating more fried chicken, they will find the cure for cancer.

What a con. Just an outright fraud. These people should frankly just be arrested and prosecuted for fraud. This is mass-marketing fraud at its worst. Pinkwashing has a new champion: Buckets for the Cure!