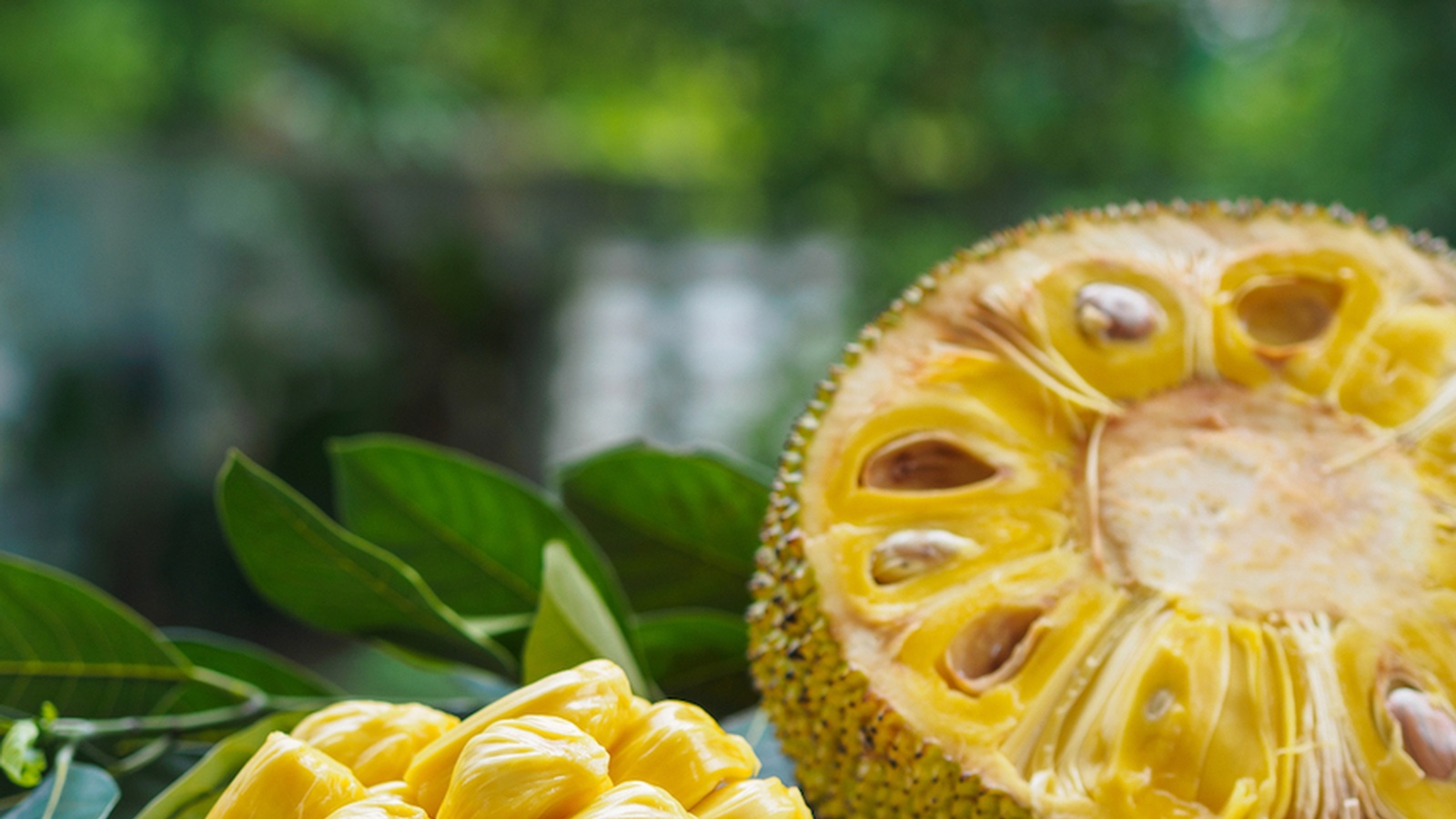 We’re all advocates for adopting more plants into our diets, but too often the new meat substitutes hitting our shelves are riddled with chemicals we can’t pronounce and we’re not sure if we want to. Luckily for us, the humble fruit packs a punch and most carnivores can hardly tell the difference!

Best served in ‘pulled-pork’ sliders, marinated in curries, or dished up in Ellie Bullen’s Smoked Jackfruit Tacos, the versatile plant does more than just imitate a meat-like texture. It’s nutrient-rich and even comes in a funky skin to boot.

The fruity part can be a mission to get into, but once you get there, there are endless possibilities!

It Is The Largest Tree-Borne Fruit In The World, But Bigger Isn’t Better

The younger jackfruits are used when making imitation meats because the younger, unripe flesh easily soaks up flavors and has that classic stringy, meat-like texture when cooked. With growing demand, young, unripe jackfruit can easily be found at health stores and some larger supermarkets in conveniently canned portions. However, where possible, try to ensure the cans are BPA free. Some places even sell pre-marinated versions, but it’s always more fun getting a little messy and making it yourself.

That’s right, when juicy and ripe it tastes more similar to pineapple or mango than a traditional roast. But like any other meat, the results of jackfruit are more about how they’re prepared. To get the quintessential BBQ flavor, it’s best to marinate the flesh in a concoction of liquid smoke, and your favorite herbs and spices.

A single tree can grow between 100-200 fruits in a single year. In a world where the meat and dairy industries are becoming increasingly criticized for the inherent environmental impact, jackfruit could be the answer we’ve been looking for. We’ve never heard of another tree that yields such a fruitful crop! So now you don’t need a guilty conscience for guzzling jackfruit every day of the week.

Jackfruit, in all its meat-disguises, holds a rich nutrient profile, packed with good dietary fiber and much-needed antioxidants. The fruit is calorie-dense, which has suggested it may be a solution global food poverty, and contains high levels of fiber, protein, Vitamin A & C, riboflavin, magnesium, potassium, copper, and manganese. And even though we don’t use the seeds in our meaty dishes, they pack the most punch - including being a source of calcium and iron.

It’s Actually Good For You

The mock-meat has been praised for its potential health benefits, which helps argue its case with rising research about the negative health effects of animal products. Jackfruit has shown to improve digestion, benefit our immune system, boost energy levels, support healthy vision, improve skin health and reduce signs of aging, regulate blood pressure and a healthy heart, and support strong, healthy bones. There is also mounting evidence to suggest the phytonutrients present may aid in preventing cancer.

It’s Been A Staple In Asian Diets For Centuries

In diets that we look to for health-promoting benefits, especially those across South East Asia, jackfruit has been a staple since the beginning of time. The sweeter fruits have been sucked on by children, other starchier fruits have been marinated in recipes handed down through centuries. Many cultures still harvest and prepare jackfruit traditionally, so while we marvel at its, it never hurts to try the traditional flavors either. If you’re seeking out the whole fruit, rather than a canned or pre-packaged counterpart, head to your local Asian market and you’re sure to be in luck.

Now that you’re armed with the knowledge, head to the kitchen and marinate some meatless magic!